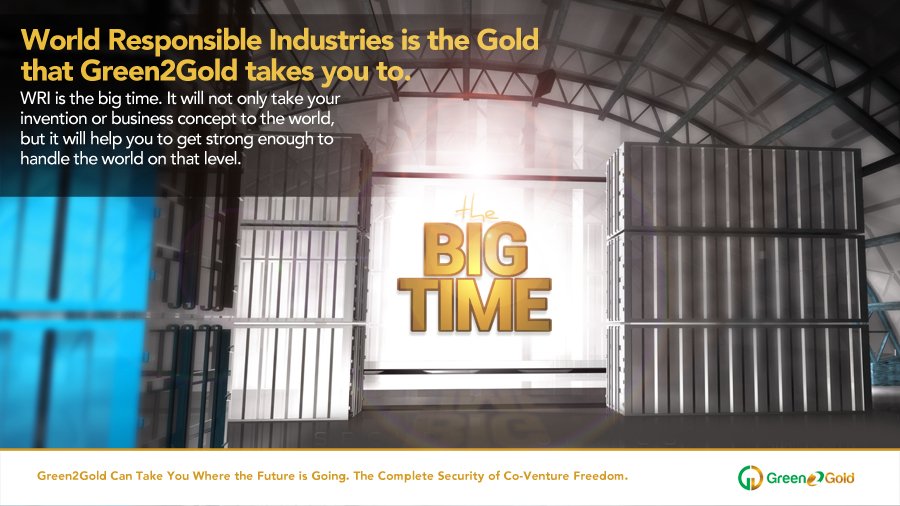 Q: What is World Responsible Industries (WRI) and what does it do?

A: Metaphorically speaking, let’s say your invention or concept was like ‘software’ and you want to make it accessible to the world. World Responsible Industries (WRI) then would be like a ‘computer’ that you are plugging your ‘software’ into. WRI can help bring your concepts, ideas, and inventions to the world marketplace at whatever level makes the most sense. The ‘software’ has to go into a ‘computer’ to be accessible to everyone. So WRI is like a ‘computer’ that as a part of its function can and will bring it to it’s most successful potential.

WRI provides a custom atmosphere for whatever it is that you are looking to do. It best brings your particular business idea, invention, etc. to the world, as you perceive it. Picking the most harmonious position in the computing system for your ‘software’ would be what WRI does.

Q: Why would I want to be a part of WRI?

A: WRI has the nuts and bolts that can make something work harmoniously in the world that is their Co-Venture. WRI has and is creating more and more connections of people to deal with, that you can be connected to that are also connecting to the WRI network. WRI is the system that is connected to the network of people and organizations and a growing network of success directly connected to the situation a lot like Apple. Apple developed a closed system. This is a closed system. You can’t just join it arbitrarily. It is a protected position and you have to be accepted into this system to be a part of it. WRI is a working harmonious creative atmosphere to put your concepts or inventions in. It completely protects you, your business, idea or invention and gives it more freedom to progress and evolve.

It is a harmonious partnership that you can’t be fired from or usurped by a board. So, you don’t have to think about it anymore or worry about it. Your invention is just accessible to the world and you don’t have to do anything about it. You can create more inventions or more projects and WRI will continue to make those potential success-gaining concepts available.

A: What part you play is determined in your relationship negotiation with WRI. That means potentially you could do anything you wanted to do that would be advantageous to the project.

Q: And what does it mean by plugging in to WRI?

A: Two main things. We are talking about the unique Co-venture system that allows you to have peace of mind and creative freedom. Secondly, WRI starts to bring your prepared invention to the world marketplace, which begins your projects professional evolution.

Q: Why would I feel secure with WRI?

A: A very basic vital reason is the Committee of Responsibility (COR) that is an independent entity at the root of the WRI system and works for everyone connected to it like a security system. It is in place without prejudice to help provide and sustain a harmony.

It protects businesses and concepts, in situations very much like a security system in a computer protects you from viruses that attack your computer.

COR further protects you against vendors, and competitors, court attacks, and huge debates and arguments in the boardroom, struggles and threats that can disrupt and put a damper on your whole life and your family, and your families’ life, as well as your personal creative process. In situations where your whole creation can get attacked and is vulnerable, for example, where someone that didn’t even create it, but gets involved with it monetarily, can take it from you. Not with COR. COR protects you. COR protects the whole entity. It’s like having a guard at the bank that has a gun and that decides who comes into the bank or not. COR is not trying to keep the bank from being successful. It is keeping it from being robbed.

Q: What is WRI’s agenda?

A: It’s WRI’s complete goal to be in a Co-Venture with everyone, and all of the world’s business. When you have a good idea, and a good ability to be in a Co-Venture with WRI, they are going to treat you like gold because they want you to be in that situation. If you can’t handle being treated that good, and you need to fight with people, they are not going to let you be with them anyway.

Q: Why would I want to give up my independence and be in a Co-Venture?

A: There are certainly different levels of independence or freedom. We used to walk across the country and we were able to flail our arms any which way and whenever we wanted and we may have felt some freedom and independence in that. If someone then came to us with a car, and said look, this can take you where you want to go much more expediently and you can completely avoid a lot of treacherous obstacles, and benefit in many more ways, but you are going to have to keep those hands of yours on this wheel, we may have felt like we are losing some freedom and some independence having to keep our hands like that.

If you are in a conventional business, do you think you are free when someone you have given some power to, can actually close down your offices, and send people in there to look at all your books, and close your bank accounts, or force you into court? Is that freedom? Because those are the types of things that can happen when you don’t have protection. When someone can take over your business, so you can’t even use it, is that freedom? We call that dependence. Dependence on ignorance.

If you want to be intelligent you are going to make it as impregnantable as possible. The United States uses Fort Knox to protect their gold. Why are they spending millions and millions of dollars to protect zillions? Why are they doing that? Because it is the most secure smart thing to do. They don’t just say they are giving up their independence having a big army around their fort. They are not giving up their independence just because they have to pass by a big army just to go in and out of the place. What they are doing is protecting their money. Protecting what is valuable to them. And that is the difference. So, if you want independence… well, independence wears a couple of different hats. One of the hats is; I am independent because no one can rob me, and the other hat; I’m independent because I can run around with money falling out of my pockets unknowingly. You call that independent because you are not protected. Protection can look like a dependence on a protection. It also gives you protection.

No comments to show.